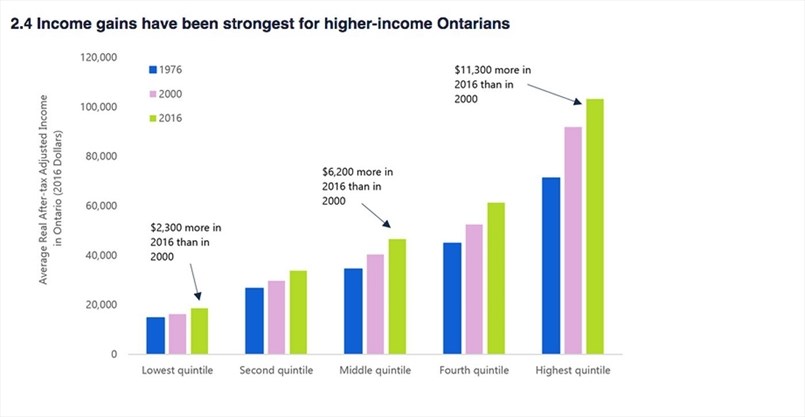 An infographic from the Financial Accountability Office of Ontario shows the province’s highest income earners made more gains in income than lower-income workers. That statistic and more make up a recent report on income disparity. – Courtesy/FAO

The average household income in Peterborough is thousands of dollars less than the provincial average.

And combined with facts from a new report saying low-income earners are finding it harder to move upward, it’s become difficult to thin the divide between the rich and poor in Ontario.

Data from that report shows income growth in Ontario from 2000 to 2016 was the slowest of any province, and that Ontario has had the slowest growth in median-family income across the provinces “by a wide margin.”

And Peterborough is well below the provincial average for income. According to Statistics Canada, the median household income for the city before taxes in 2015 was $58,381. Compare that to the Ontario average of $74,287 or the national average of $70,336.

If low-income earners are able to better keep up with costs then it will improve their chances of increasing their income mobility, says Jim Russell, president of United Way Peterborough and District.

The United Way Peterborough and District sponsors the Housing is Fundamental Report and has undertaken studies on homelessness and income.

That’s referring to the basic income pilot project, which was launched by the previous Liberal government with 4,000 program participants in Lindsay, Hamilton and Thunder Bay.

The point of the project, according to then-premier Kathleen Wynne, was to collect data on whether or not a guaranteed basic income, which supplements low-income residents with a government assistance of up to $16,989 for individuals or $24,027 for couples, would work.

On July 31, the Progressive Conservative government cancelled the project. A group attempted to take the province to court over the decision, hoping to overturn it, but on Feb. 14, the court shot down the appeal.

Russell says the information that pilot project, had it finished, would have provided valuable data on whether a basic income helps move people out of living with a low-income.

Whether a basic income actually helped elevate people up the income scale was something the pilot could have discovered, adds Russell.

He notes that by providing a minimum standard to meet basic needs, people rely less on food banks and charities.

“What we’re seeing right now is the strains on capitalism,” he says.

Russell also says precarious employment is another factor in workers’ inability to improve their incomes.

And many of Peterborough’s workers live with precarious or insecure employment which affects their day-to-day lives. That’s according to studies done by the Precarious Employment Research Initiative, which was performed by Peterborough Public Health with the help of the city and a slew of agencies and institutions.

Precarious work is defined by the initiative as having irregular hours, unpredictable wages, less access to job training and usually consists of part-time, contract or temporary work.

The first study in that initiative found 33 per cent of Peterborough workers face precarious employment, while 29 per cent describe their employment as being vulnerable, 18 per cent say it is stable while only 20 per cent call their work secure.

Peterborough Public Health has also done other research on how having a low-income affects people’s health. According to a 2018 report, individuals who make a low-income have a shorter life expectancy than their high-income counterparts, are more challenged with mental-health issues and rate their own health as being lower than those earning more.

“Individuals living in low income have higher rates of chronic diseases and are more likely to die earlier than individuals who are better off financially,” says the report. “Growing up and living in low income can also contribute to food and employment insecurity, lower levels of education, being poorly housed or homeless, social isolation, stress, and difficulty accessing quality health care.”

It also says that suffering those factors may even perpetuate their low-income status.

Mayor Diane Therrien says it’s no surprise it has become harder to get by as more people are living paycheque to paycheque.

“We know that income inequality has been rising for the last couple decades,” says Therrien.

In part that’s to do with large corporations that aren’t paying their fair share, she says. Outrage from Panama Papers back in 2017, where journalists discovered corporations had been hiding massive amounts of wealth offshore to avoid taxes, has disappeared and no one speaks about it anymore.

“There’s people that have hundreds of millions of dollars that are able to cheat the system,” she says.

Without that money coming in and circulating the economy, the public is worse off, she notes.

But Therrien also says it’s possible to change that. People can advocate to higher levels of government for change and she adds there’s plenty of giving people in the community supporting low-income earners through the United Way, YWCA and Kawartha Food Share.

Locally there’s also been a painful transition as the economy moves away from large-scale manufacturing jobs and people who expected to have careers in those fields need retraining, she says.

“The good full-time jobs aren’t there in the traditional sectors,” she says.

But it’s not hopeless for people who are dealing with this challenge.

The health unit report on the health effects of low-income life says its possible to create communities where people are more easily able to afford the basic necessities of life. It recommends people advocate to their city councillors, MPs and MPPs and to join advocacy groups to deal with issues related to poverty.

Mayor Therrien says advocacy is important, as many people don’t know how to access help or don’t know it exists.

“It’s about linking people up to the services they need,” she says.

Russell says the federal government supports seniors, so there is a precedent supporting a basic income guarantee across Canada.

While some benefitting from that program might be comfortable staying at that minimum income level, others would likely want to augment that, he explains.

And by building on that income and aspiring to “get more and have more” they can move up on the income scale and stay out of poverty.

“We have a lot of work to do at a local level and also pressuring senior levels of government to step up,” says Therrien.

Taylor Clysdale covers municipal, provincial and federal politics for Peterborough This Week.You can follow him on Twitter @TaylorClysdale and reach him at tclysdale@mykawartha.com.