The Report Card is In! 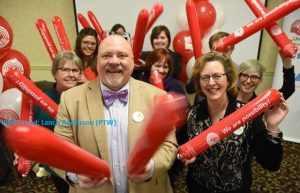 There was a celebratory tone today down at the water’s edge in the Holiday Inn as United Way Staff and volunteers reveled in the success of the 2016, 75th anniversary campaign results.

Close to 100 people were in attendance to share in the celebration. Among those was Eileen Kimmett who shared with the room her particular enjoyment of participating in the Paint the Town Red event. Spending the day trying to eat at as many participating restaurants as possible with her children. She stated “it was fun but filling!” This continued a light hearted competition between her and friend Andy Sawada and his family to see who could get to the most restaurants at this annual event.

Marion Burton President of the Peterborough and District Labour Council, brought greetings from organized labour and reminded people that the United Way is the charity of choice for organized labour across the country.

Gwyneth James the 2016 Campaign Chair was thanked by United Way Board Chair David Fell, who noted,   “Gwyneth’s  desire to serve as Chair this year, while at the same time expanding her own business, is evidence of her belief in Peterborough, in service, and in ensuring that lives are changed for the better.”

Departing from tradition, the United Way revealed a Community Campaign Report Card, which graded different aspects of the campaign. “Volunteer Leadership”, “Community Spirt and Participation”, “Tenacity and Commitment”, all received an ”A”, with “Potential for Growth” being graded at an “A+”.

There was palpable pause in the room when it was announced that the success of this year’s campaign would result in a 5% increase to all United Way Partner agencies. Jim Russell CEO of the United Way effused, “the success of this “A” campaign, is not just about the grade and that achievement, but it also allows us to meet even more needs in our community, which at the end of the day is what United Way is at its core, all about.”

The 2017 Campaign Chair has been selected and that community announcement will take place later in April.