United Way of Peterborough and District today announced the 2016 recipient of the Scholfield Award of Community Distinction. The annual award was established to recognize an individual or organization for their outstanding contribution and ability to mobilize change within the community.

This year’s recipient was renowned community leader and lawyer Stephen Kylie. On hand for the presentation was selection committee member and United Way Board member David Wills, who stated, “There were a number of outstanding nominees, and at the end of the day Stephen was the unanimous choice of the committee.”

Adding an air of special seemliness the original recipients and award namesake Paul and Ina Scholfield were on hand to witness the presentation. Board Chair David Fell noted, “The commitment of volunteers to our community is unparalleled, and the quality of leadership demonstrated by Mr. and Mrs Schofield all the way through these last 12 years, to today’s recipient Steve Kylie, demonstrates that fact.”

Taking a lighter air, CEO Jim Russell noted that “at some point Steve is just going to have to start turning down awards and accolades, just out of fairness to others,” a reference to the fact that Mr. Kylie most recently won the Chamber’s Business person of the year as well as being appointed the incoming Chair of Trent University.

The Community Campaign Continues until January 19, 2016 and members of the public are encouraged to donate. 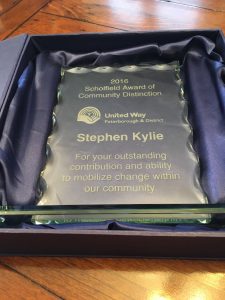 Peterborough City Hall Council Chambers was the location for an important campaign milestone for United Way Peterborough and the Community. Gwyneth James, 2016 Campaign Chair, was on hand to thank 25 City of Peterborough workplace campaign committee members who surpassed their fundraising goal, helping to push United Way Peterborough past the 1 million mark. James expressed both her pride and gratitude by stating “I am so proud of this community and I thank you for all your hard work on this year’s campaign.”

Mayor Bennett brought greetings on behalf of the City and spoke to the important work of the City’s annual campaign. “It is hard work to pick a goal every year and then try to do a little bit better and I thank the committee for their hard work.”  A cheque was presented to United Way in the amount of $75,822. This amount now brings the total United Way Community Campaign to just over 1 million dollars.

United Way CEO Jim Russell noted that this is the point in the Community Campaign when larger workplaces are wrapping up. Russell said “For the last 5 years the City has hit its goal and we look forward to our larger workplaces that haven’t finished yet to help bring us home.” Included in this list are Trent University, General Electric, Fleming College and PRHC.

With only weeks left in the Campaign the public are reminded that they can make donations online at www.uwpeterborough.ca or by calling 705-742-8839 or in person 277 Stewart St. These donations help to create hope and possibility for close to 60,000 people living in our community.